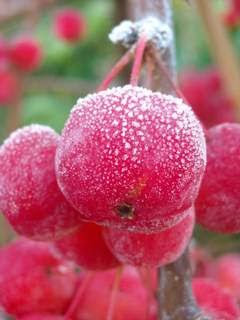 There are plusses to this winter wonderland. The branches of the apple tree are outlined in snow, reaching and twisting like a black and white scribble against the soft grey sky. There are half a dozen goldfinches scrambling around the remains of the lemon balm looking for the little black seeds and the blackbirds are fighting over a bumper crop of pyracantha berries and what remains of the crab apples.
It all looks pretty, but I am a bit worried about the birds going hungry (According to the RSPB, a robin needs to consume half its own weight in food each day in weather like this), I keep feeding them and putting out water, but it keeps getting covered in snow. Better hope the Gulf Stream keeps doing its thing.
Last week I was in Wales checking out a garden that looks like it might fall to my care. There is lots of stuff there but most urgent was the pruning of some grapevines. I have never owned a grapevine before so it was all a bit of a learning process but my uncle handed me his felco secatures and a printout of the RHS info on training grapes and pointed me at the polytunnel. Tough as old boots (apparently). Just take the shoots back to one or two strong buds in early winter and come back when it has started growing, so they say. We shall see. Looks ok so far...

I didn't get much of a run-up to the task but grape pruning is not one of those jobs you can leave until late winter or spring as by then the vines may bleed alarmingly from the cuts. When things start growing again I will select some good strong shoots and, while I am there, smarten it up by rubbing off all the snaggy dead bits, which should be obvious by then.

Just when I thought it was all done, I discovered a young vine hidden at the back of the polytunnel behind a dense stand of fruited raspberries. Vines in their first few years need more training than when they are older. Home for tea and printouts...

By the way, have you noticed that in the recent cereal advert where Mr Kellogg creates cornflakes in his kitchen, the stuff growing outside the window is corn, as in, like, wheat? As any fule kno, cornflakes are made from maize.
The picture is Malus sargentii 'Red Sentinal'.

Listening to: Best of the Eagles (yee-hah!)