Back in the dim and distant mists of time, when dinosaurs roamed the land and pterodactyls were frequent bird table visitors, I spent an enjoyable few years managing rock bands.

There were headline gigs, support gigs. Mainstream venues and pubs. In some places the PA was state of the art, in others you thanked your stars for the decent size amp in the back of the van. Some nights the crowd was ecstatic. Others, the bar man, his dog and a couple of regulars would sit there, nodding and comparing the band to musicians that had died before the lead singer was born. Occasionally people listened to the first thirty seconds, got bored and went off to get drunk and find someone to sleep with. So it goes.

I have just finished a modestly epic tour of the land, promoting The Plant Lover’s Guide to Snowdrops. And, as I pull myself vertical, brush off the debris and straighten out again, there are some clear parallels.

The ambition of course is always to dive onto the stage to screaming applause, deliver a blisteringly tight set then disappear into the night and let security sort out the aftermath. (On which note, next time I want a tour bus).

The reality is that one crowd’s true messiah and speaker of truth is another’s momentarily diverting oddity. That you turn up, pray that the audio visual works, that the cake is good and that some people turn up. Pretty much in that order.

Despite large explanatory posters, bookers will have you delivering punk to an audience used to chamber music, or indie tunes to a thrash metal crowd. That awkward moment in the Blues Brothers where, after a hail of beer bottles, they start playing ‘Stand by Your Man’ rather than ‘Gimme Some Lovin’’ (or whatever bluesy thing it was). That.*

But gardeners are nice people. Enthusiastic. Keen. Not generally prone to throwing missiles.

At the Chelsea Physic Garden I barely got in the door when I was descended upon by a well-bred lady clutching a bunch of snowdrops and an Avon Bulbs catalogue. Awaiting my appearance to re-identify last year’s purchases. (Ok good. ‘Magnet’ and ‘S Arnott’. Easy. That one? No idea. Oh that was the one picked from a relative’s new garden. Yes, it is different. No, no idea.) 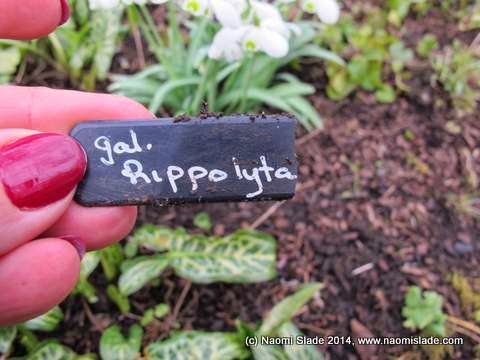 And you have to love the audience at the National Botanic Garden of Wales who braved horizontal sleet and a wind-chill factor of about -4C, for an hour of wandering the grounds, cheerfully discussing planting combinations.

I raise my hat to the stylish dame at the Cottage Garden Society day who had each fingernail painted with a different, botanically accurate, snowdrop variety. The lovely fellow in Ireland who gave me Galanthus ‘Hill Poë’, the subject of my first snowdrop crush, deserves a longer visit.

With time, things get increasingly rock and roll. You get in the car. Again. Get out again. Set up your stuff. Stride onto stage and shout ‘Helllooooo......Shrewsbury...Southampton...um, where are we now?’ Get bossed around by old ladies in the audience. Talk to the local media. Compared to virtually everything else live^, give me Radio any day.**

There are times, too, that are just destined for the autobiography. When the lights go down and you are there at the front and, as you start to deliver your guitar solo, you realise that that Jimi Hendrix and Brian May have wandered in from the bar to see what all the fuss is about. And then your strings break, one after the other.^^

So. Many thanks to all those who came to see me, I hope I managed to say something interesting in all the mayhem.

The tour is done. I have come down. I am slightly wiser. But not so wise that I won’t do it again. I have learned that front-man charisma is easier to pull off if you have a band behind you. And roadies. And, ideally, groupies bearing strong drink and ice-cream. That things don’t always go as planned, which is why it is called busking it. And like so much in life, it is all better with the lights on.


And now I’m heading back into the metaphorical studio to sort out the tricky second album. It is going to rock.

^That I have tried, so far. Not tried live telly. Bring it on

**No, Tony Blackburn, snowdrops are not all the same. Wanna make something of it?

^^ Trust me, the metaphor works


*** If you want me I’ll be hanging out with the ghosts of Keith Moon and Freddy Mercury in the back of the van. I invited Steve Marriott but he is on a spectral moped half way to Brighton.

July 22, 2016
Writing a book is often likened to having a baby. And with some justification. There is the giddy conception and whirlwind of excitement, then the warm glow of a contract signed. It then the process starts to lag and become heavier; sweetmeats are deployed to maintain performance – pregnancy, like literature, is an endurance sport. My new book, Published by Green Books, 22nd September  2016 Finally, fat and fecund with promise the manuscript is delivered to the publisher, for supervision and medical intervention if necessary. And, finally, the screaming and anguish suddenly stops. The Author's desk (the buns have already been eaten) And here is where the process differs. After months of to-ing and fro-ing, deliberations about nuanced argument and tone of voice, followed by concerns about stacking words in a column and balanced captions, it is confiscated. They just take it away. To put it another way, it is like watching caterpillars. They eat and eat and eat and
Post a Comment
Read more

February 05, 2016
What I have learned today is that budget archive boxes are a false economy. Any saving is squandered on parcel tape to wrap the miserable container to the point where it resembles the misshapen prey of a filing-obsessed spider. The full box bulged and warped as I wrestled. It repeatedly burst open at the top and disgorged slithering contents. It mocked me with torn handles and strained joints (those of the box rather than my own). I fought back, suppressing an uprising of RHS Chelsea catalogues, a stampede of assorted articles and the subtle exit of   book reviews , all destined to be consigned to the cupboard. And it dawned on me that this is not a problem I have had before. Filing is not exactly second nature, but I have never before had to quell an actual mutiny of both packaging and subject matter. But then, as the back catalogue becomes more extensive, more bulky and weighty then surely it must become more potent too. Libraries are powerful places. History, knowledge, th
Post a Comment
Read more